Beverley Kobelsky graduated from the University of Saskatchewan in 1987, with a

Beverley started working at the University of Saskatchewan 15 years ago. At that time, she was hired contractually as a sessional lecturer to teach costume construction and design, and part-time as an ASPA employee to design and maintain the Drama department costumes and work with the students. In 2013, her position evolved into a full-time ASPA position as an Administrative Assistant for the Drama department, which includes her teaching duties.

Beverley teaches Costume Design & Costume Construction (a half credit class) which is taught three times annually. Her classroom consists of a dozen bench tops with ample room for sewing machines. The class limit is 10-12 students so each student has access to their own sewing machine. Multiple mannequins line the walls around the room, fully dressed with colorful costumes and accessories. Her window ledges and shelves are stuffed with mannequin heads wearing different hats, in varying styles and colors. 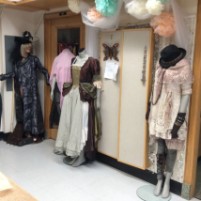 Her love of the craft is what drew Beverley to the theatre. She admits that, “I have the best job” and “I get to dress people up, so they can pretend to be other people for entertainment…it’s wonderful”. She enjoys the collaborative nature of theatre, and how it “compels everyone to bring their best part to the table and to do whatever it takes to produce the show”. What Beverley enjoys most about her job is teaching students. She is always surprised at the amazing talent, high energy, and excitement of each new crop of

students. She emphasizes how important it is to have the one-on-one time with the students, to encourage them to move from the draw and print stage to the construct and design stage, and to see their own designs “come to life”. Relationships that she establishes with her students often go far beyond just taking the class. For example, some of her former students have gone on to become high school teachers in Saskatoon and she continues to help them with costumes when she can.

Beverley has received many accolades over her 15 year career. She received the USSU Teachers Excellence Award in 2013. She was the recipient of the Saskatoon and Area Theatre Award for Outstanding Achievement in Design (Costumes) in 2011 for “Urinetown” and in 2010 for “The Merry Wives of Windsor” for Persephone Theatre, in 2014 for “Romeo & Juliet”, in 2016 for “A Midsummer Night’s Dream”, and in 2017 for

“Richard III” all for The Shakespeare on the Saskatchewan Festival. In 2017, she was awarded the prestigious Henry Woolf Saskatoon and Area Theatre Award for Continuing Achievement, which honors individuals or groups in the Saskatoon area for outstanding contribution, dedication, and achievement within the theatre community.

Beverley appreciates the support and protection that ASPA provides by being the “voice” for all ASPA members’ concerns and the various events that ASPA organizes to promote networking among ASPA members. In particular, she values the APDA funding that is available to all ASPA members for professional development. She recently (in June) used her APDA funds to take part in a tour with students to Prague and back in March 2017, she attended an International Artists Collaboration in New Zealand.

Beverley grew up on a farm and has a strong work ethic. She believes that “the University of Saskatchewan is a wonderful place to work”. Beverley would like to encourage all ASPA members to “work hard” and “don’t compromise your moral standards”. She continues, “If you work hard and live with integrity you will get to where you want to be” and “you will have enriched connections with others”.