Now labor unions are making the case for even less work: dropping days worked down to four.

That’s one of the changes unions are proposing as part of their vision for the future of work, which is outlined in a report to be released Friday by the AFL-CIO, the largest federation of labor unions in the US. (Disclosure: I am a member of the Writers Guild of America East, which is part of the AFL-CIO.) The report, which was shared in advance with Vox, focuses on finding ways to make sure workers can best benefit from automation and other technological changes.

Come to the November Free Pizza and Pop Social Event!  Register on Eventbrite and bring your ticket to receive your Pizza and Win a great door prize!

How to Show Respect in the Workplace

Respect is a key factor to have a healthy work environment. From professional interactions and good communication to giving others credit for their work and working as a team to get things done, we can demonstrate respect in the workplace. A respectful workplace creates a healthy work environment where staff are valued and recognized for their ideas and their role within the organization. Respect in the workplace promotes teamwork and increases productivity.

Here are some ways to demonstrate respect in the workplace: END_OF_DOCUMENT_TOKEN_TO_BE_REPLACED

A leader is defined as someone who directs or guides an individual, situation or team. Good leaders motivate, inspire, and model a good work ethic. They also encourage participation, cooperation and teamwork in various situations that require individuals to work as a team. They are so many ways that an individual can learn and grow by being in a leadership position. END_OF_DOCUMENT_TOKEN_TO_BE_REPLACED 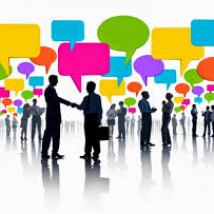 Have you ever been having a bad day, and someone did something nice for you, and your mood instantly changed? Kindness is an often overlooked attribute. Simple acts of kindness do not have to cost a lot of money. In fact, sometimes the smallest gifts can be the most thoughtful. Doing something nice for your coworkers is a wonderful way to improve your relationships and raise moral in the workplace. END_OF_DOCUMENT_TOKEN_TO_BE_REPLACED

Drew Dudley defines every day leadership as “the everyday act of improving each others lives”.

Employees that demonstrate every day leadership: